Question: What is best? Online or land based slot machines?

A question like this depends of course on preference. But some universal truths can be established:

It is entirely up to you how much you want to let each of these truths weigh when you make your decision. But if you are playing slot machines for financial reasons only, your choice should be simple.

Although, online progressive jackpots does not always reach the heights of the land based jackpot, every other financial factor indicates that the online casino is more profitable.

Spins247.com says: As much as we love free drinks, they cannot be put up against the obvious fact that online slot machines are much more profitable. 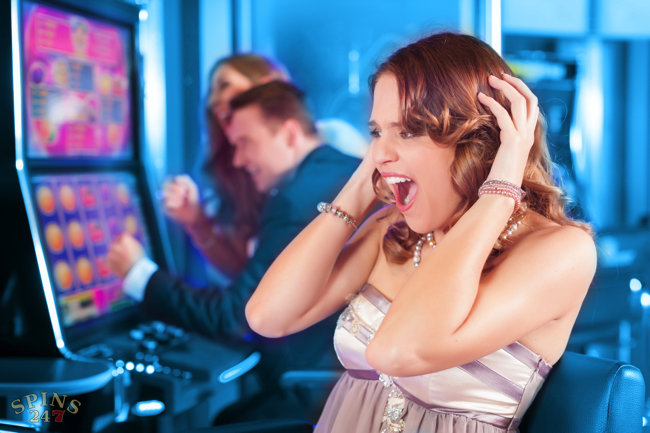 Question: How big is the biggest jackpot ever paid out on a slot machine and where was it won?

The Reel Story: Every casino and slots room obviously wants to be associated with the biggest jackpot in history, which is probably why the information on the subject varies.

After extensive research we can quite confidently conclude that the amount was $39,713,982.25 and that it was won on a Megabucks slot machine in The Excalibur Hotel and Casino in Las Vegas on March 21st 2003.

The winner is said to be a 25 year old software engineer who was visiting Vegas because of the NCAA Basketball Tournament.

The previous record was about $34.9 million and was won at the Desert Inn in Las Vegas on January 26th in 2000. This casino is now closed.

Most of the biggest land line slot machine jackpots are usually paid out in certain amounts over a number a years, or deals can be made in order to have it paid out faster.

Net Entertainment (software developer) and Betsson Casino were named as co-owners of the landmark payout record when it was confirmed by Guinness World Records.

Homer J. Simpson says: “If you really want something in this life you have to work for it. Now quiet, they’re about to announce the lottery numbers”.

The Reel Story: The online progressive jackpot amounts are ticking in tact, increasing every day. The biggest land based jackpots are still generally larger, but it’s probably only a matter of time before these proportions are changed.

The biggest ever slot machine jackpot paid out online came on the Mega Moolah Progressive Slot Machine at River Belle Casino May 13th 2009. The lucky winner was a 36 year old business owner, husband and father Georgios M. from Greece who walked away with 6.3 million Euros.

However, a list of some major ones can be established. Their current amount at the time that this was written is listed below within brackets.

Spins247.com says: Be sure to check the terms and conditions before you go to hunt for jackpots. There are cases in the slot machine jackpot history where players thought they won millions but hadn’t because they e.g. didn’t bet the maximum amount.